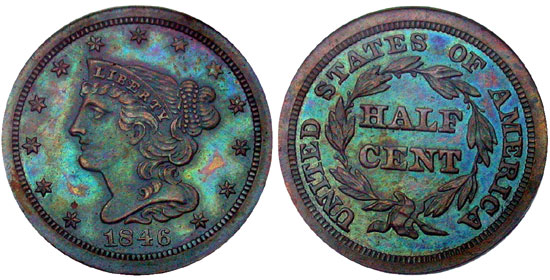 Proof Braided Hair Half Cents (Buy on eBay) were struck for each year of the series with the exception of 1853. In an unusual situation, more issues of the series were struck in proof-only format than issues struck for circulation. The proof-only issues include the coins from 1840 to 1848 and 1852. These proof coins can all be found as originals struck during the date indicated or as restrikes struck at later dates. A small number of the restrikes were made in the mid-1850’s, but the majority were made by Mint Director James Snowden during the period from 1858 to 1860.

The basic criteria for identifying originals versus restrikes is the size of the berries on the wreath of the reverse design. Original proofs have large-sized berries, which are more prominently visible. The restrikes feature small-sized berries, resembling little dots. The restrikes can be further differentiated into “first restrikes” and “second restrikes.” For certain issues, the “first restrikes” are significantly scarcer and carry large premiums over the “second restrikes.”

The original 1852 Proof Half Cent is the rarest proof issue with only five pieces known. Examples which display large berries on the reverse are considered to meet the criteria of original proofs, however in the past some researchers believed that some of these were restrikes based on the die state. Subsequent research and weights within tolerance of the standards have supported the large berries reverse as originals. An example of this rarity graded Proof-65 Red sold for $603,750 at auction in 2014.

Coins For Sale on eBay